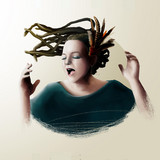 Hey! My name is Sole. Actually, it's not exactly my name but it doesn't matter. I live in Verona (Italy) and I'm a singer. I started my trip into music when I was very young, influenced by my dad who’s what I call a "very passionate basement musician". I studied piano for five years, somehow taught myself how to play guitar, and took modern singing lessons. At the age of 16 I moved to the United States, but then I moved back because my visa expired...(I keep saying that, but honestly, it's because I missed my dog and my mom). After attaining a bachelor’s degree in Arts, Humanities and Modern Literature at the University of Verona, I'm now studying to get a Bachelor’s degree in Pop Music (with a major in Live Performance). In 2013 I met Warner Music writer and producer Fabio Campedelli, with whom I started to collaborate (by recording demos for the record company). In 2015 I joined the Italian Xfactor...I'm not sure how I feel about that. In 2018 I released my first studio album “As I Am”. Right now I'm working with guitarist Zak Hinegk on a project called “Sweet Sunny Side”. I'm a dog person. I love pizza. I don't drink (except wine, sometimes). I want to travel everywhere in the world. Welcome to my page! Sole