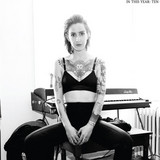 Toronto's Praises - the dark electronic solo project of Beliefs' Jesse Crowe - debut album, In This Year: Ten of Swords, is set for release on December 7th from revered indie label Hand Drawn Dracula (Chastity, Tallies, Dusted). As the shoegaze/industrial band Beliefs, Crowe and Korody have earned praise from publications including Pitchfork, The Guardian, Billboard, NOISEY, FADER, Stereogum, Exclaim!, BrooklynVegan, Dazed, Clash, and The Quietus. Praises arrived at a time when Crowe was struggling to find an outlet for her most personal demons. The project was created as a quiet conversation on the love, loss, and lessons that can’t quite fit within the public forum of a collaborative band. With songs coded in life’s stories, she invites friends and lovers to find lines encrypted in the lyrics that point directly at them. Deeply personal, yet highly fictionalized. Over the years since Praises' origins, Crowe has been learning and growing her musical palette from solo guitar to full band and now has expanded to feature piano, modular programming, and hardware synths. She has also moved forward to self-production, with rhythmic additions and production nods to her Beliefs bandmate Josh Korody, who added texture and structure to the album via modular synth. With influences ranging from Nick Cave to Portishead, Praises pulls from both a masculine and feminine struggle to bring the torment back into the piano where it belongs.