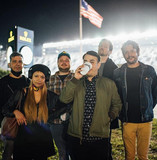 There's this dynamic that churns hard in The Blurred Odyssey, the debut full-length album by ascendant Orlando garage-soul enterprise The Sh-Booms, out March 22, 2019 on Limited Fanfare Records. The music pumps with the hot, red blood of life irrepressible. But there's a cloud on the horizon, the doomed sense of life's finitude, that fueled these songs. Rather than dead-end nihilism, though, it's resulted in the kind of urgent, creative friction that Hunter S. Thompson could get down with. In making this album, The Sh-Booms have dug through the blur of life, swam through a sea of booze, to find love and truth in the shadow of the void. Although a soul band through and through, the grease and bite they've been picking up in the years leading up to this big step out have been forged in the bad company of punk and garage bands. From that underground now rises a new hurricane of big orchestration, maximum stomp and fresh intent. It's a little ache and a lot of party all wrapped up in a wrecking ball. Since their 2011 inception, The Sh-Booms have become kind of a thing in their native scene and beyond -- they've share the stage with The Roots, Of Montreal, Talib Kweli, KRS-One, Jacuzzi Boys, Budos Band,