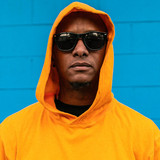 Amp Live has fused the sounds of Electronic, Reggae and Hip-Hop with a technical and classical sensibility. Amp recently co-founded Unified Highway with Rebelution’s Eric Rachmany, Del & Amp Live, after an acclaimed tenure with Hip-Hop duo Zion I.

He has produced for Linkin Park, Bassnectar, Akon, Collie Buddz, The Submarines, MGMT, Goapele, and Atmosphere, as well as an official Radiohead remix album. Amp’s decorated career continues to expand. After captivating concerts across the West Coast, two Cali Roots Festivals, and Lollapalooza, the versatile talent is in strong stride. “I used to feel like I was in a box. Even though that box was cool and successful, I didn’t feel like I had a voice. ‘Cause I don’t rap, I don’t sing. Basically, whoever I’m with, what they say is my voice in a way. People can interpret beats in any way, but with lyrics, it is pretty straightforward,” he says, after experimenting with his voice in some of