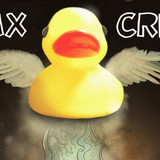 When John Rider joined with fellow musicians Bob Gosselin and Dave Reed to form Max Creek in 1971, he envisioned not just a band, but a community to welcome and embrace people who couldn’t quite fit in - people like himself, who found the mainstream to be an uncomfortable and constricting place. As he puts it, he desired Max Creek to be “a vehicle for the dreams of musicians, artists, poets or anyone else with a vision.” He could not imagine that, 48 years later, that Max Creek would be going strong and continuing to make meaningful music. Ask Murawski how the band has lasted 48 years and he’ll tell you, “we ride to gigs in separate cars.”

There’s something to that. But watch Creek in action and you’ll see a different truth—they’re a family with connections far too deep to uproot. Linda Cournoyer, who designed the “45” album cover, has designed every one of the band’s album covers, made all their merch, and done lights since (?). DJ the sound man has been with the group off and on since the 80s, Mike the tour manager since the mid 90s, and many of the traveling fan family look back to their first shows in the early 80s, or at least heard about those years from their parents. And truly nothing has seen more action than pianist Mark Mercier’s touring briefcase, which may or may not have lyrics, and receipts, from the band's first gigs in it somewhere.