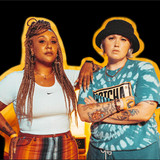 Duo of Seattle MC Gifted Gab [formerly of Moor Gang and "one of the most promising rappers in the Emerald City for a while," Billboard] and San Francisco MC Blimes Brixton. Both women were predicted for success by Pandora & Next Big Sound in their 2018 overview of the "new class of female rappers" alongside Cupcakke and Rico Nasty. The video for their previous single "Come Correct" has received 10M+ video views across platforms and earned the pair press coverage from The Passion Of The Weiss ["the synergistic vibe Blimes and Gab share while tossing bars back and forth harkens back to spine-tingling rap duos like Ghost and Rae or Styles P and Jadakiss"], Ambrosia For Heads ["the duo of spitters trade bars with effortless cohesion"], Billboard, The Stranger, The Hype Magazine, and co-signs from Joyner Lucas and Rah Digga. Blimes also collaborated with Method Man on 2018's "Hot Damn" [5.1M+ YouTube views].