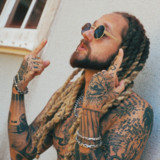 S Pri, né Stefan Prieler, was born in Baden, Austria. Since his early childhood, music has always been an important part of his life. He grew up listening to a variety of musical genres, including Hip Hop, R&B, funk and EDM, to name a few. S Pri's intense love for dancehall music and Jamaican culture started to emerge when he first discovered Beenie Man's album 'Back to Basics.' He started gaining knowledge of Jamaican and Caribbean culture, Rastafari ideology and the history of reggae and dancehall music. With the little money he earned working every weekend, S Pri began investing directly back into his own music. He bought an affordable studio microphone and audio interface, to set up his own home recording studio and he began to learn the art of composing, recording and mixing his works. S Pri's first stage experiences were with local sound systems in Austria. From then on, he performed at many events in the Austria and Vienna regions. After years of working with local (Austrian) producers, one day S Pri caught the attention of Alystr Nash, a musician and producer based in the UK. Alystr Nash pitched the idea to S Pri of moving to Manchester, England, and collaborating on a variety projects together. S Pri jumped at the opportunity and did just that. Now, based in Manchester, England, S Pri is making massive hits there and abroad.