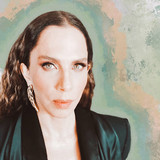 Sertab Erener, undoubtedly one of the most powerful voices in Turkey, was born in Istanbul. The musical talent of Sertab, who never missed an opportunity to sing and dance, was apparent at a very early age. Having a coloratura soprano voice, Sertab Erener studied at the Classical Western Music Department of the Conservatory after high school. However, she left the opera in favour of pop music, the most suitable genre to reach wider audiences. She started her professional career in the 90s, sharing stage with many famous artists such as Sezen Aksu. Supported by Sezen Aksu, in 1992 she recorded her first album, "Sakin Ol". The album sold over 1 million copies, making it one of the best new coming albums in Turkey. In 1999, Erener recorded "Private Emotion" featuring Ricky Martin, which was included in the Turkey and Middle East releases of the Latin American artist's 1999 album. In 2000, Sertab Erener released the compilation album titled “Sertab” in Europe and the EP “Bu Yaz”. This EP also included the unforgettable Turkish-Greek duet called “Aşk/Fos“ which she recorded with Mando. At the 2003 Eurovision Song Contest, the artist represented Turkey with her magnificent performance that attracted the attention of all Europe. “Every Way That I Can” won the first prize at the contest held in Riga. Sertab released her latest album ‘Ben Yaşarım’ in June 2020. Sertab continues her trailblazing music career by producing and singing!