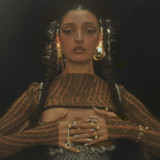 At just twenty three-years old, the London-based singer finds artistic range and nuance that may catch new audiences off-guard. Born into a musical family, artistic inspiration has been inherently present in LOLA’s life since birth; as a young girl she would stumble into improvised jam sessions held by her grandfather, the legendary jazz dummer Jack Parnell. And rhythm is clearly genetic; LOLA’s father’s taste for funk was imparted via his sprawling record collection; Stevie Wonder, Parliament, and Jamiroquai all made an impression, and LOLA came to understand how groove could be weaponised. Through her mother, LOLA discovered a more angelic path, finding choral and chamber music but also the introverted artistry of Kate Bush, Frou Frou, Sade, Seal, and David Bowie at his most bittersweet.   Often, to speak of maturity when listening to a musician of LOLA’s age is to play with fire. Yet the intricate compositions, haunting melodies and spiritual musings in her songs to date defy the listener to suggest otherwise. The candidness of delivery in LOLA’s smattering of performances lend audiences to believe they’ve finally been let in on a guarded secret. And in the tradition of those mysterious tales of royalty and romance once imparted to LOLA as a young artist, perhaps they have.