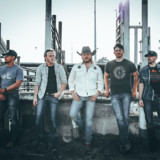 A young singer songwriter whose Rockytonk flare and soulful sound has quickly made a name in the Texas scene and beyond, Jon Stork was born and raised in Beasley, Texas.

Growing up on the coastal plains and being from a musical family, he picked up a guitar after watching his older brother write, sing and perform in a band. As the years went by, he began following new types of music, along with styles, that started influencing the young talent.