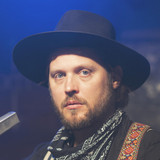 Chance McCoy is a Grammy winning indie folk musician, producer and film composer from the Appalachian Mountains of West Virginia. An independent musician and back to the lander, he produces all his own music and film scores on a remote farm in Monroe County, WV. In 2012 an invite to join Old Crow Medicine Show took him from living in a rundown mountain cabin in the Blue Ridge to winning a Grammy for best folk album 'Remedy'.

He has performed with Mumford & Sons, The Lumineers, Ke$ha, Brandi Carlisle, Willie Nelson, Shakey Graves, Yelawolf and Margo Price. He is a US musical ambassador and recognized as the West Virginia state Fiddle, Banjo and Dulcimer champion. In 2009 he won the prestigious International String Band Contest known as 'Clifftop'. He has composed music for George Washington's Mount Vernon and contributed scores to