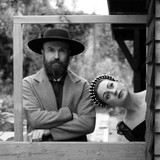 HMS Morris are an art-rock group from Wales. They’ve been touring and recording since 2015, and are currently supported by the Cardiff-based Bubblewrap Collective. With an ‘undercurrent of post-punk edginess, the band toy with colliding synthesisers and cooing vocals and still manage to create something cohesive and alluring’ (Clunk). Their debut album 'Interior Design' is 'a real trip, a multi-dimensional sound that traipses across hitherto unexplored regions of sound' (Clash), and earned the band a nomination for 2017's Welsh Music Prize and a showcase at Canadian Music Week. In late September 2018 their new album ‘Inspirational Talks’ was released. Described as ‘Innovative, forward thinking pop music’ (Earthly Pleasures), this ‘strange and beautiful music’ (Electronic Sound) will form the thematic basis for a stage show currently in development and earmarked for performance in 2020.