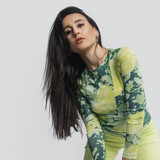 “One of the sturdiest pop debuts of the year” Guardian Music "Pure Pop Euphoria" Billboard “Fresh, pure and intelligent” EQ Raised in Lanark, a small town between Glasgow and Edinburgh, Scottish artist thisisNAMASTE (aka Natasha Marie Stewart) was captivated by music and songwriting from an early age. Following High School she moved to London to study at the Institute of Contemporary Music Performance and secured a degree in Creative Musicianship.   Taking her childhood pop influences and a love of Scandinavian artists such as Robyn and Tove Lo, her first few releases have been catchy, concisely-written pop songs that linger on the mind way past the listen. Future pop beats blended with dizzying choruses, result in promising first offerings from the rising new artist.  Earning her stripes touring as a backing vocalist for the likes of Rita Ora, Ella Eyre, Bebe Rexha and Martin Garrix, she has performed on some of the world’s biggest stages whilst developing her solo career under the moniker thisisNAMASTE. She is also an experienced songwriter and frequently joins sessions as a topliner on other projects. Signing to Humble Angel Records last year, a flow of releases soon followed with plenty more in the pipe line for 2021. The Scottish born singer has already received support from the likes of Billboard, Clash Magazine, PopJustice, The Guardian and BBC Introducing. Get ready to hear a lot more from this exciting new artist.