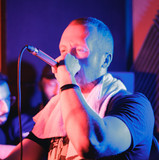 Crafted by himself, Mayday hails from Birmingham. Taking inspiration from garage mixes his mother use to play in his early years and infusing them with a love of international music on a wider scale, the 0121 native is set to bring his playful storytelling music to the world. The self-proclaimed ‘Kingstanding Captain’ is one of the most exciting prospects from the West Midlands to emerge in recent times. Mayday is slowly carving out his own lane in the grime scene, one that is inspired by many but not easily imitated.   2019 saw two completed music funded projects in Ocho Rios, Jamaica and Osaka, Japan. Winning the ‘Rising Star’ Award at the 2019 Birmingham Music Awards topped a solid first half of the year with the second half seeing the EP release of ‘Ghost Of October’. 2020 was Mayday's 'Every Second Tuesday' rollout, a song every second Tuesday, creative, right?   2021 saw a continued, steady streams of singles which he capitalised on the momentum by releasing 'Complete The Mission', a 9 track project which shows and reinforces why Mayday is at the front of Birmingham's next great Grime generation.