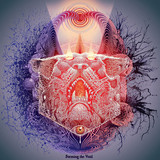 You are a celestial traveler powering through the blinding lights at the end of the tunnel into the next world, crossing barriers of space and time without fear. Interdimensional shamanic sludge rockers Forming the Void are here to conjure an ecstatic trip of atmospheric wonder and immerse you in waves of psychedelia. No strangers to the road, FTV have crossed the US alongside Truckfighters, Church of Misery, Kings Destroy, Gozu, Year of the Cobra, and Howling Giant. This summer sees them voyage to Europe to hit the road with Spaceslug. Their otherworldly sound has earned them spots on large festivals such as Psycho Las Vegas, Denver's Electric Funeral Fest, Stoner Daze and Stoner Jam at SXSW, Maryland Doom Fest, and Descendants of Crom. For their new album ‘Reverie’, the band seeks to further explore aspects of the sound they've shaped on their previous outings, guided by a desire to strike a balance between organic and intentional. The result is an album that reaches new levels of refined depth, mystical energy and cosmic transcendence. "Displaying an elaborate musical tapestry that swirls from devastatingly heavy riffs [...] Rift is very much an organic and elaborate offering from a band whose potential is fast becoming realized." METAL HAMMER “Louisiana’s Forming the Void is one of stoner metal’s best-kept secrets […]Any self-respecting fan of stoner, sludge prog, or hell, even grunge, owes it to themselves to give this album a spin. ” METAL INJECTION