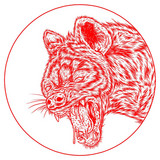 The Greatest Asshole Streetpunk Band from Indonesia Started in 1998 as No-Racist Project, DOM 65 is a pioneer in the emergence of streetpunk in Indonesia. The band has musical transformation along their existence. Their debut EP is a split album with fellow collective Laga Bara saw their first encounter with HC/Punk raw style released on Realino Records in 1999. The 2nd EP "Oi! Ruck N' Raw!" move towards fast-paced British Oi!/Steetpunk. The legendary third EP "Secret Warehouse" continued the Oi! pogo style but contains a mixture of progressive rock and heavy metal. This followed up with the first LP "Greatest Pledge Articles" (2006) in more complicated structures, long duration and psychedelic layers of progressive rock but still heavily contained of Oi!/punk energy. This cited as the most progressive album of punk in Indonesia outside of the post-punk scene even though raised a highly debates in the community. While keeping this form, the next album "Committed" (2010) saw their focus on the production resulted a shorter duration in intense structure and rhythm. After a long hiatus, DOM 65 come back with a reissue of Greatest Pledge Articles (Remastered) and 2 singles Gentho Kates and John Smith. Adnan DK and Imam Senoaji are the remaining members.