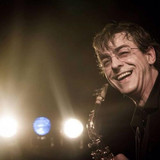 Alessandro Bertozzi was born in Busseto (Italy) in 1965. He has played sax on many CDs and in various live tours accompanying Italian and foreign artists. His first album as an artist and composer was “Big City Dreamer" (1998) recorded in Italy. He then went on to record his second project, “Talkin' back” (2003), in New York. Featuring important American guests such as Hiram Bullock and Bob James, it also includes two songs sung by Paola Folli. His third CD, entitled “Crystals” (2009), was produced by Lorenzo Poli and includes the participation of John Patitucci, Randy Brecker and Hiram Bullock. His fourth CD was recorded for Warner Music Group, “Contralto” (2014), in which he rearranges and reinterprets 10 hits from the Warner catalogue. The following CD is “Into The Strings” (2015), produced with a string orchestra conducted by Maestro Stefano Zavattoni and featuring the Archimia quartet. Alessandro then released an EP, “Funky party” (2016), containing 4 tracks where he goes back to the funky sound of his first recordings. His latest work is “Trait d'union” (2020), an imaginary journey through the African continent in search of a fusion between the artist’s creativity and the culture of its people. The short lyrics that accompany the compositions are in the Wolof language and are designed to convey a single message: that life only has meaning if it is lived serenely. Label: Level49. Alessandro’s sax is a Yamaha Custom YAS-855 with Olegligature ligatures.