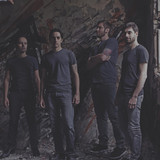 From the first notes, Lost in Kiev brings an epic and massive post rock, driven by the energy of rock mixed with some electronic sounds. The 4 members of Lost in Kiev like to tell stories with their music, they writes and records their own words proposing for samples and create their own visuals stuff, like video projections, to creating a consistency between the graphics and the emotions, giving the listeners a coherent experience. They released their first album “Motions” (2012, Dunk! Records & Voice of the unheard records), about travelling and distance, a second album “Nuit Noire” (2016, Dunk! Records), an odes to nights of dreams and loneliness. Well-received by the press and by the audiences at their live shows (more than 80’s throught EU), the group is now ready to reveal their new album: “Persona”, will release on April 2019 on Pelagic records. The words of Persona will raise the question of the human nature through the artificial intelligence mask.