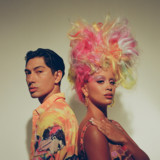 LION BABE is a New York bred funk and soul duo comprised of multidisciplinary artist Jillian Hervey and producer/DJ Lucas Goodman, (also known as Astro Raw.) The pair are known for their unique sound and look and associate themselves with the term 'futuristic nostalgia' to describe their genre. The duo has been steadily rising, and have released one LP titled "Begin" (2016 with Universal) Featuring debut hit: Treat Me Like Fire along with "Wonder Woman" produced by Pharrell Williams & "Jump Hi"