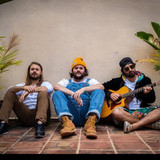 Based in Los Angeles, Lucid Phase is composed of members Jacob Flack, Garret Laver, and Cyrus Maleki. They all initially met in college at Savannah College of Art & Design, where post-graduation they moved to Los Angeles. Cyrus was consistently creating music with various bands while booking travel for some elite artists touring in the U.S., such as Ocean Alley and The Rolling Stones. Jake was nominated for an Emmy on Wild Wild Country and continued sound-editing for a variety of films and TV shows. Meanwhile, Garret followed his passion of creating music videos for bands such as Stick Figure and up-and-coming LA artists as he developed The Video Kitchen production company and YouTube channel. Together they released their first-ever studio album, entitled The Crop, released May of 2020. Lucid Phase are currently independent and approach song creation with experimentation and creativity. Their music can be described as a blend of jam, rock, blues, and reggae into sonic bliss. Their sophomore and forthcoming album Orchid Thief is set for release late Summer of 2021.