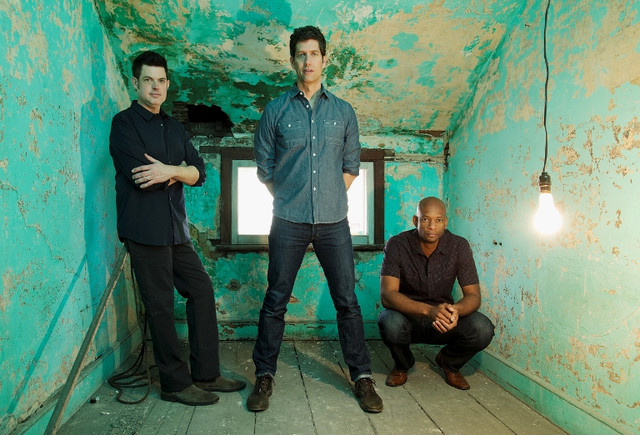 Along with such similarly styled outfits as Goo Goo Dolls and Semisonic, the New Orleans-based trio Better Than Ezra helped open the floodgates for countless alt-pop acts of the late '90s (including Matchbox Twenty and Third Eye Blind) by merging college rock influences with mainstream aspirations. In 1993, they scored their biggest hits with the radio staple "Good" from their platinum-certified major-label debut Deluxe. Although subsequent releases didn't perform as well, they remained a Billboard 200 presence into the 2010s with half-a-dozen full-lengths including 2009's Paper Empire and 2014's All Together Now. Originally formed in 1988 as a roots rock outfit with slight elements of country and punk, the group's first incarnation consisted of four college students from Louisiana State University: Kevin Griffin (vocals, guitar), Joel Rundell (guitar), Tom Drummond (bass), and Cary Bonnecaze (drums). The band's early performances were expectedly held at college bars and fraternity houses, and their debut cassette-tape recording, 1990's Surprise, received positive press and comparisons to such alt-punk stalwarts as the Replacements and Dinosaur Jr. Despite these accolades, Better Than Ezra's future was thrust into doubt when Rundell committed suicide on August 8, 1990. The remaining bandmates initially opted to go their separate ways after Rundell's passing, but they reunited as a trio before the end of the year. Deciding that a change of scenery would be helpful, Better Than Ezra relocated to Los Angeles shortly thereafter, where they laid down tracks at a friend's home studio to create their 1993 independent release, Deluxe. The album continued to raise the band's profile and eventually drew the attention of several major labels. The trio signed with Elektra Records, and Better Than Ezra's new label reissued Deluxe two years after its original release. The album spawned their biggest international radio hit with "Good," which helped push the album to platinum status by the end of 1995. But despite enjoying a hit right off the bat, Bonnecaze opted to leave the group in early 1996 and was replaced by a fellow New Orleans native (who, at the time, was living in San Francisco), Travis McNabb. Shortly after welcoming their new member into the fold, the revised Better Than Ezra entered the recording studio to work on their second major-label release, 1996's Friction, Baby. Although the album was musically similar to its predecessor, it failed to match the commercial success of Deluxe and departed rather quickly from the charts, with the singles "Desperately Wanting" and "King of New Orleans" only achieving modest rotation on modern rock radio. The group proceeded to create their own recording studio in New Orleans (dubbed Fudge Studios), where they recorded 1998's How Does Your Garden Grow? The album failed to reestablish the group as a commercially viable rock act, and Better Than Ezra parted ways with Elektra before issuing a compilation of rare tracks, Artifakt, through their official website. Undeterred, the trio then signed with the independent Beyond Music label and issued their next release, Closer, in 2001. "Extra Ordinary" fared well on several charts, but Beyond Music declared bankruptcy before the band could issue a second single. Understandably, Better Than Ezra took a break before resurfacing in 2004 with a live album documenting a hometown show at the House of Blues. A greatest-hits collection was issued the following year, but to the delight of the group's devoted fan base (the "Ezralites"), Better Than Ezra were not finished. After signing with the New York-based Artemis Records, the band released Before the Robots in May 2005 and departed for a summer-long tour. Drummer Travis McNabb left the lineup four years later, having been recruited to join the country duo Sugarland instead, and Better Than Ezra tapped Michael Jerome as his replacement before unveiling their seventh album, Plays Paper Empire in 2009. Borne from the fact that Griffin was intent on only releasing further Better Than Ezra material if he thought that it would be an essential addition to their canon, a hiatus ensued. During this period he kept his focus on music, but concentrated on writing material for other artists such as James Blunt, Barenaked Ladies, and the aforementioned Sugarland. Then, following sessions with Tony Hoffer -- the Grammy-nominated producer who had previously worked with many acts including Beck and Belle and Sebastian -- Better Than Ezra announced that they planned to release an eighth studio album in September 2014 entitled All Together Now. Their highest-charting effort since 1993's breakthrough Deluxe, the Tony Hoffer-produced set included the singles "Crazy Lucky" and "Gonna Get Better." In 2018, the band celebrated the 25th anniversary of their debut by releasing the single "Grateful" and a vinyl-only reissue of Deluxe. ~ Greg Prato, Rovi