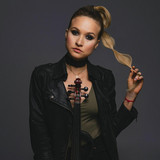 Music and technology have merged. However, the cry for raw, intricate, and powerful instrumentation is back and stronger than ever. The Russian born, Los Angeles based award-winning violinist, producer, string arranger, and DJ Alfiya Glow, is the hat trick music fans have been waiting for. Alfiya’s tracks and arrangements have been featured in leading online electronic dance music magazines including EDM.com, Daily Beat, EDM Lead and This Song Slaps. She performed on stages such as Walt Disney Hall, Carnegie Hall and others, as well as been booked by Insomniac events, MMW, Google, Ferrari and more. Alfiya is involved in producing music for film and tv. She has worked with grammy-winning string arranger Larry Gold. A few of her upcoming releases have been signed with Enormous Tunes Records. At her shows Alfiya creates an entire experience as she thoughtfully and carefully crafts songs and mixes that not only get crowds moving, but stir the heart and soul in a way only live instrument-backed production can. producer | dj | violinist | string arranger - alfiya@alfiyaglow.com