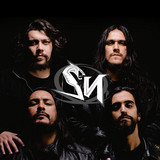 Formed in late 2014, the band carries a classic sound yet fresh groove metal in which they incorporate prog, thrash, death and hard rock elements to the table. Releasing their first studio work in April 2015, a 4 tracks EP named "Aurt", aclaimed by the critics and nominated to several awards. Sobernot were aknowledge as the revelation band on that year. From 2016 to 2017 the band played over 50 shows all over Chile gaining a solid fanbase thanks to their powerful live performances, while simultaneusly working on their first LP throughout 2017. On 22 April 2018 Sobernot releases their first album "Silent Conspiracy"