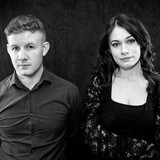 Without Willow are and acoustic folk duo from Co Donegal, Ireland. They recently got to the semi final of the International Songwriting Competition 2019 out of 18000 entries with their song The Heather Field. Their songs Sail My Direction and The Heather Field have also gotten them to the finals of the IMRO Christie Hennessey Song contest on two occasions. Once in 2016 and most recently in 2019. They have opened for musicians Moya Brennan, Mick Flannery, Declan O’Rourke and Eddi Reader to name a few and performed at the Belnash Festival, Swell Festival and most recently sold out shows in Germany in July 2019. They released their self titled debut EP 'Without Willow' in 2017, released follow up single 'November Fog' in 2018 and are currently working on their debut album. www.withoutwillow.com