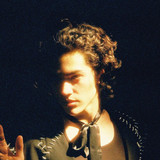 Conan Gray has quickly cemented himself as one of the freshest voices in music during his meteoric rise. The singer-songwriter from central Texas—known for writing all his songs from his bedroom and for his unapologetic authenticity—has quickly become one of the biggest emerging pop stars in the world. Following the virality of his critically acclaimed Sunset Season EP, his debut album, Kid Krow, released in March 2020, reached #5 on Billboard Top 200, #1 Pop Album, #2 Billboard Top Album sales and was the biggest new artist pop debut in over two years.

Along the way, he performed on television shows such as Late Night with Seth Meyers, The Late Late Show with James Corden, and The Today Show. Conan's platinum breakout hits, “Maniac” and "Heather," charted around the world and attracted unanimous applause of everyone from Sir Elton John to Taylor Swift. With over 3 billion global streams, he has been crowned “Best New Artist” by Billboard, touted on People’s “Ones To Watch,” and has garnered praise from Vogue, V Man, Teen Vogue, Cosmopolitan, Paper, The Fader, Forbes, MTV, I-D, Wonderland, Clash, Notion, Seventeen, and many more. He has sold out three North American tours, two European tours, and additional shows around the world.