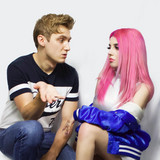 ‘We arrived in a city in 2084. We’re alone. There’s no one else here. We’re not quite sure where we came from. The city’s covered in neon. It kinda looks like the 80s of the future. We’re lost and looking for something. We just don’t know what that is yet.’ Futuretape is a musical exploration of what it’s like to have grown up online, what it’s like to always be connected to the world while simultaneously feeling disconnected from it. Their electro-pop sound, which brings together a love and understanding of timeless pop, disco and scenes like PC music, is framed by aesthetically pleasing visuals. The duo draw from vaporwave, synthwave and anime, fusing these together in a style that nods to the old but one that looks forward to the future. Born in a small-town, Charley spent much of his youth feeling misunderstood by the people around him, both in his queerness and creativity. He moved to London to pursue music, where he met Nicole, a fellow singer-songwriter from Sicily, Italy in a performance class. Their creative partnership and friendship sparked soon after when they were given a brief to create a new arrangement of Creep by Radiohead. Their unified desire to make bold pop music – and a shared feeling of disconnect from the world – led to Futuretape. The duo, who write and produce from their makeshift bedroom studio, take inspiration from pop artists from across the decades – from Eurythmics to Charli XCX, from Madonna to Kim Petras.