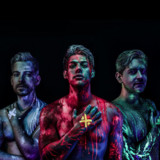 Formed in 2020 the three guys Chris, Ben and Martin from SHRX put together the essence of EDM in their individual style with pop elements. This results in danceable and powerful songs that will be released throughout the year. Like their first single release the band’s name is pronounced “Sharks”. According to that, it’s the message of their first release, to stay strong and positive. Don’t let anybody bring you down, but follow your own path. While SHRX banded in 2020 it is not the first musical contact of the trio and during the years the songwriting process has grown up. Individual growth and international live performances (e.g. Los Angeles, Berlin) led to a change from rock to pop, without losing the musical roots. Now the band focuses on meaningful lyrics likewise bracing beats, synthesizer sounds and rocking live instruments