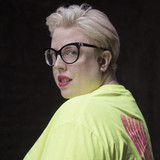 The Blessed Madonna, formerly known as The Black Madonna, is one of the most celebrated DJs of her time, thanks to her eclectic, joyous sets, which can encompass anything from classic electro and new wave to the latest techno and house white labels. Her production work, including the widely praised 2016 single "He Is the Voice I Hear," walks the line between disco and techno, with the emotional weight of the former and the driving momentum of the latter. One of dance music's foremost activists, she is renowned for her commitment to humanitarian work and her outspoken views on LGBTQ rights and gender inclusivity. A string of further releases culminated in her 2016 single "He Is the Voice I Hear," which acted as the first record for her own label, We Still Believe. Mixmag named her DJ of the year (the first time they granted a woman the award), and she appeared on the magazine's cover wearing a gold crown. In 2017, Stamper began a residency at London club XOYO, selling out the venue for 13 straight weeks. She then relocated to the city and became a popular DJ on BBC Radio One. She appeared as herself in the video game Grand Theft Auto Online, where she was given a radio station called We Believe. While she hasn't released any original material since "He Is the Voice I Hear," she has delivered high-profile remixes for Robyn, Silk City & Dua Lipa, Georgia, and others.