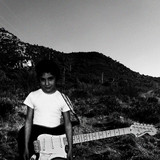 ByM Project is a rock band from Extremadura (Spain), formed in 2011 by Beni (guitar, bass, keyboard and drums) and María (vocals and drums). As a presentation, ByM Project published on December 16, 2011 its first single "Go!", And later, at the end of December 2011, its first self-published album called "Always on the road", which was a full album of instrumental songs and soundtracks, cataloged within a genre that has been called as "soundtrack rock". The album was officially presented on the program "El Garito", of Canal Extremadura Radio, in February 2012 and received its first analysis in the "Made in Extremadura" section of the Extremaduran music magazine "LaCarne Magazine" in which they sentenced the album as a "great study work with great doses of creativity and inspiration". After a few years dedicated to the creation of soundtracks for the documentary series "Cien mil pedaladas" ("One hundred thousand pedal strokes") about how to travel the world by bicycle, the band got involved in the production of their second album, "Blowing By The Wind", which has been published at the beginning of 2018, being chosen by the program "El garito" of Canal Extremadura Radio, as the album of the week in the third week of February. It incorporates a

exploration through new soundscapes, piano arrangements and new string instruments. Despite being an initially instrumental album, a second version is expected in which all their songs will include lyrics (already written) and voice.