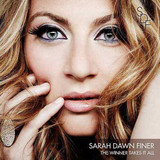 A singer, songwriter and performer whose soulful vocals and heartfelt music has moved listners from every genre. Sarah Dawn Finer released her first EP 2005, and has since then had many goldselling albums and two of her singles were the most played on Swedish radio 2007 and 2009. She sings and writes both in English and Swedish and shot to stardom in her homeland thanks to her strong showing at the 2007 Melodifestivalen competition. The daughter of an American dance therapist and a British medical journalist.