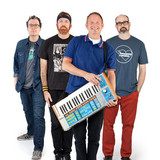 Pioneers of the late 90’s Pop-Punk and Geek Rock movements, Nerf Herder are perhaps best known for their powerful theme to the iconic Joss Whedon TV show, Buffy The Vampire Slayer. Formed in Santa Barbara, California, in 1994, Nerf Herder was signed to major label Arista Records soon after their ironic tribute “Van Halen” stormed the Modern Rock charts in 1996. The video for their follow-up single, “Sorry”, featured Mark Hamill and Miguel Ferrer, and played regularly on MTV. Following years saw the band touring the world multiple times, and releasing a number of albums on various labels, including esteemed indie punk label Fat Wreck Chords and novelty powerhouse Oglio Records. The current band features founding members Parry Gripp and Steve Sherlock, with newer members Linus Dotson (x-Size 14) and Ben Pringle (x-The Rentals). Nerf Herder’s 5th album Rockingham is an explosion of geekiness with songs like “At The Con,” a song written after a performance at DragonCon, “Ghostbusters III,” a lamenting tune about how the sequel will never be released, and “I’m The Droid (You’re Looking For),” which is made entirely of lines from Star Wars and was recorded at Skywalker Ranch. Other instant classics include "The Girl Who Listened To Rush" and "We Opened For Weezer," a completely autobiographical tale of the band's first tour with Weezer during the Pinkerton era. As of 2018, Nerf Herder has been active playing shows and recording new material.