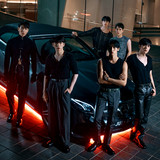 South Korean hip-hop boy band Monsta X was formed in 2015 on the reality television competition NO.MERCY. The septet is composed of leader/vocalist/dancer Shownu, vocalist/dancer Wonho, vocalist Minhyuk Lee, vocalist Ki-hyun Yoo, vocalist/dancer Hyungwon Chae, rapper Jooheon Lee, and rapper I.M. On NO.MERCY, the group performed covers of songs by Ariana Grande, Justin Timberlake, Jay Park, and others. They released their early singles -- "0 (Young)" and "Interstellar" -- during the show's run. Their debut EP, Trespass, arrived in 2015 and peaked at number five on the Korean charts. The Rush EP followed months later, pushing Monsta X to number three. In 2016, they released a pair of mini-albums, The Clan, Pt. 1: Lost and Pt. 2: Guilty. The EPs became their first to break into the Billboard World Albums chart, at numbers five and three, respectively. The third Clan installment was issued in early 2017. Titled Pt. 2.5: The Final Chapter (and later re-released as Shine Forever), it topped the Billboard World Albums chart and rose to the number two spot on the Korean chart. That year, Monsta X issued their fifth EP, The Code, and made their debut in the Japanese-language market with "Hero." That track was followed by "Beautiful," which topped the Japanese daily singles chart. In 2018, the group received the honor of serving as torchbearers for the Pyeongchang Winter Olympics before continuing their drive into the Japanese market with the Japanese original "Spotlight," which later landed on their album Piece. Back in Korea, they issued another EP, The Connect: Dejavu, as well as their second full-length, Take.1 Are You There? The set soared into the Top Ten on the U.S. Heatseekers and World Albums charts, even peaking at number 24 on the Independent Albums list. They closed the year by becoming the first K-pop group to appear at Los Angeles radio station KIIS-FM's yearly Jingle Ball concert. Monsta X kicked off 2019 with Take.2 We Are Here and a Steve Aoki collaboration, "Play It Cool." In May, they signed with Epic Records and readied an English-language debut, which arrived in the form of "Who Do U Love?" featuring rapper French Montana. In October they released their seventh EP, Follow: Find You. Late that year, Wonho left the group. ~ Neil Z. Yeung, Rovi