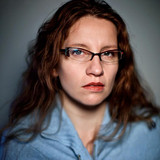 Allison's Invention is a music project by singer-songwriter, composer and producer Allison Tartalia. Called a “singer with a sultry voice” (New York Times), Allison has "...translated her classical piano training into a cohesive style that incorporates chamber pop, folk, pop and jazz, and transcends the typical constraints of the singer/songwriter classification” (Cincinnati City Beat). Her EP "Sweet and Vicious" contains 6 songs of lush, melodramatic pop, and includes the track "Ran" which was featured on Lifetime's Dance Moms. Recent projects in which Allison has been at the helm as producer include Sharon Goldman's 2019 record, "Every Trip Around the Sun," which reached #2 on the Folk Alliance International Folk Chart, and upcoming releases from Becca Gohn and Magical Realist. In addition to her solo work, Allison Tartalia composes music for film and theatre. She scored the 2016 feature-length romantic comedy, Get Happy, (official selection at the Montreal Film Festival, Best Romantic Comedy at the Manhattan Film Festival, available on Amazon Prime) and the award-winning documentary 5,000 Miles From Home, for which she was nominated for an Emmy. She has also composed and arranged two original full-length musicals, 1918: A House Divided and Birds on Fire (book and lyrics by Barbara Kahn), both produced by New York City’s Theater for the New City. Her music has been heard on NBC, PBS, Lifetime, Bravo, Oxygen and TLC.