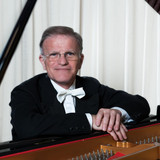 Giovanni Umberto Battel, born in the province of Venice, began his piano's studies at four years old with his father Camillo. Other teachers were Luciano Gante and Lya De Barberiis. He graduated full marks, honors and honorable mention Trieste Conservatory and obtained, full marks and honors, post-graduate diploma Santa Cecilia Academy, Roma. After classical studies, he took a degree in musicology, full marks and honors, Bologna University. He taught at Conservatory of Castelfranco Veneto, Padova, Trieste and Venice. From 1997 to 2009 has been Director of Conservatory of Venice. Between 1974 and 1979 he won five national piano competitions (Osimo, La Spezia, Triste, Taranto, Albenga). Between 1978 and 1982 he won prizes in international piano competition (Stresa, Enna, Pozzoli, Viotti, Busoni). After his début as a soloist in 1976 for Venice's theatre "La Fenice" he has given many concerts in Italy. Since 1986 Battel has also played in Europe, Russia, Turkey, Japan, U.S.A., Canada. He played with chamber and symphony orchestra. He has taught master classes and has been a member of the commission of piano competitions and music consultant for concert seasons. In 2014 he was appointed expert by the European Commission Education. He has recorded for the Italian radio and television. He recorded CDs. From 2015 began publishing of live recordings collected along the whole concert career, with music from Bach to twentieth century. This project still continues with new recordings.<br>