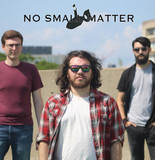 Based out of Massachusetts' South Shore, No Small Matter formed in 2016, and has been gigging regularly since 2018. The group's rhythmic and percussive layerings bring a unique spin to their music with influences ranging from Jazz, Metal, Classic rock, Pop and everything in between. They released their first single track, “Summer,” in December of 2017, which was produced by their friend Max Baker. Working with a tight budget, this debut song was recorded in their practice space (the basement of drummer Zach Duncan’s house). “Summer” remained the band's only officially released song until March of 2019, when they teamed up with producer Joe Merrick of Guilty Dog Studio in Marshfield, Massachusetts. The band dropped their self-titled EP, and quickly started gaining more followers. They have since recorded another EP, which released on July 27th, 2019, and debuted their first music video, “Eyes Open,” on Feb. 28, 2020. "Eyes Open" has since received a nomination for the 2020 International Independent Music Video Awards (IIMVAs). Working with Jon Delange of Tinderbox Music, No Small Matter has secured Television Network Sync Licenses with several major networks including, the Discovery Network, NASCAR, Fox Sports, E!TV, MTV and more! With plenty of original content still in the works, No Small Matter will be making music for years to come.    Zach Connelly: Vocals/Bass Gordon Zemotel: Guitar Zach Duncan: Drums/Percussion