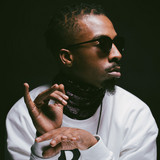 Jack Preston is an Atlanta-based multi-instrumentalist, producer, and rapper. A member of a military family, he moved around the country as he was raised, and spent time in North Carolina and California, as well as in Georgia. He started on drums, then took on guitar and keyboards, and eventually got into production, mixing samples and live instruments. Among his early releases were all-instrumental projects such as Pickled Beets and The Language of Anguish, as well as the thought-provoking likes of Trouble and the collaborative In the Land of Wanderers (which featured his group the Dojo). In 2015, he issued the eclectic End of the Future, on which his flow, frequently laid-back and consistently unassuming, belied his complex wordplay. ~ Andy Kellman, Rovi