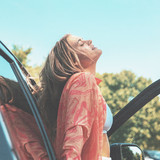 For 20-year-old singer/songwriter Alana Springsteen, it’s always been about storytelling. Picking up the guitar at age seven and writing her first song at nine, Springsteen quickly understood that she wanted to follow in the footsteps of the iconic Country women she grew up listening to – Shania Twain, Faith Hill, Carrie Underwood, and Taylor Swift. The Virginia Beach native felt the pull of Music City with every new lyric she wrote, making an official move at age 14 and landing a publishing deal almost immediately with her heartfelt lines and unquenchable drive. Today, Springsteen’s earned over 22 million on-demand streams in just over a year, with fan favorites like “Always Gonna Love You,” “Think About You,” “Best Nights,” and latest release “Different When You’re 17.” Signed to Morris Higham in partnership with SB Projects, the 2021 Pandora Country Artist to Watch just dropped steamy Roman Alexander duet, “Trying Not To.”