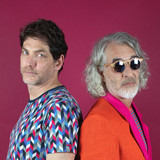 recorded in California and Brazil. The album was featured at the top of the New Releases section of the website The Best of Brazil, and has received airplay and praise from highly respected DJs with radio shows in the U.S., Brazil, Japan, and Europe. Following the release of Sunny Day, Chico and Dave toured in Brazil in July/August 2018, performing live on the radio and in São Paulo on ShowLivre. The recording of that performance has been released digitally by Showlivre as a live album - “Coelho & Ridnell no Estúdio Showlivre (Ao Vivo)”. In April 2019 Coelho & Ridnell released the official video of the title track “Sunny Day” which got over half million views and has been shared via Facebook all over the world. Also in April 2019 Coelho & Ridnell signed with the Japanese independent label Village Again Association (VAA) which released “Sunny Day +4” in Japan three months later. The duo received heavy radio play on the biggest stations in Japan and did a short tour there in October 2019, opening up Day 2 of Peter Barakan’s LIVE MAGIC festival. Sunny Day +4 was later voted in the Top 10 for the 2019 Brazilian Disc Awards.