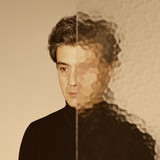 Iranian-born, New York-based electronic music producer Kamran Sadeghi operates in the worlds of both experimental dance music and sound / video art. Extremely process oriented, he uses his attention to detail to create immersive, hypnotic sound worlds. As a child he was drawn to visual art and only started to make music in his late teens. Initial dreams of becoming a jazz drummer gave way to a fascination with production and sound design. In 2000 he began recording experimental music under the alias Son of Rose, subjecting acoustic instruments to real-time computer synthesis. Under this moniker, he recorded the albums Top Flight (2006) and Divisions in Parallel (2007) for the Dragon's Eye label and All In (2009) for Blanket Fields. Sadeghi's first album under his own name, Through Thickness, came out in 2008 and was also an experimental affair, combining electro-acoustic sounds with abstract electronic beats. That year, Sadeghi relocated from Seattle to New York while touring with dance company Zoe|Juniper as a live sound artist.