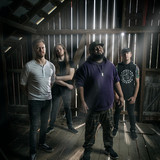 https://www.discrepanciesmusic.com/ Discrepancies, the Rap/Rock band out of St. Louis, have formed an undeniably powerful and innovative sound. Comprised of Garrett Weakley (Bass), Addison Bracher (Guitar/vocals), Zach Allard (Drums), and Antonio Metcalf (Vocals) have formed a unique take on Rap Rock incorporating heavy riffs, soaring choruses, and breakdowns with intense lyricism and hip hop elements. In January 2018, Discrepancies signed to InVogue Records. They released their debut album “The Awakening” in March of 2018 and had over a million streams in the first week. "The Awakening" landed on Billboard charts peaking at #32 Alt New Artist and #108 Top New Artist. The band set out on multiple short-run tours throughout the year with bands such as Ded, Kottonmouth Kings, Memphis May Fire, and even the Final Vans Warped Tour. The band played the final Vans Warped Tour in the summer of 2018. They joined the lineup for Rock USA the following year as well as continued their support for the album. In January of 2020, the band released the first single from their 2nd LP. The single, Control, pushed over 500k views and streams before the album release and continues to grow. The band released 4 more singles, riding the wave through the unfortunate 2020 global pandemic. The 3rd single "Blame Me" debuted at #38 on the Billboard Mainstream Rock Indicator Chart. Their 2nd LP released October 23rd, 2020.