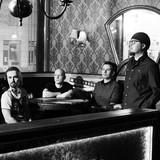 Primal Maze was born from a duo project. Initially, Ville and Jussi were thinking of a two-man band that would play semi-acoustic sets consisting of cover songs. As so very often in life, the guys got hungry and things started to take their own path. Soon Jussi and Ville were keener on writing their own material instead of playing cover songs. Jussi introduced the first riffs and Ville wrote preliminary vocal lines. Thus, the first rough drafts of the songs were made. It soon became evident that the songs required a full band to reach their full potential. Jussi had come across Hannu, a drummer with whom he had once shared a rehearsal space. Early in 2018, Jussi asked if Hannu could meet and try out some songs together. After a few sessions, Hannu asked whether the guys had a bass player in mind. Although some options had been thrown around, in the end, they really didn’t. Luckily, Hannu did. Janne practically joined the band during his first rehearsal. Hannu and Janne helped to rearrange songs, giving them the final touch to be recorded and finally released. Eventually, the band was complete. More Primal facts @ primalmaze.com