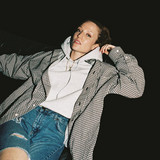 Grammy-winning singer/songwriter Jess Glynne made her early-2010s breakthrough in the UK as the voice of chart-topping tracks "My Love" with Route 94 and "Rather Be" with Clean Bandit. Born and raised in North London, Glynne first signed to Atlantic Records in 2013. From there, she contributed vocals to a number of key tracks including Route 94's "My Love" which topped the charts in the UK before finding the ears of Clean Bandit, who recruited Glynne for 2014's "Rather Be" which became a global smash and took home a Grammy for Best Dance Recording. Following further hits "Right Here" (with Gorgon City), "Real Love" (with Clean Bandit) and "Not Letting Go"(with Tinie Tempah), Jess' debut album I Cry When I Laugh followed in August 2015. Buoyed by her success on the singles charts, I Cry When I Laugh debuted at number one on the UK albums chart. The album led to an extensive touring schedule, which wrapped up in late 2016, only for Glynne to dive back into the studio at the start of 2017. After weeks spent writing in LA, she retreated to the countryside for additional recording sessions alongside a team of her closest collaborators. She wrote the majority of the record during that time, including the singles "These Days" with Rudimental, Macklemore & Dan Caplen and "I'll Be There" which became her seventh number one. The album, Always in Between arrived in October 2018 and topped the UK charts. She then paired with Jax Jones for the single "One Touch" in May of 2019.