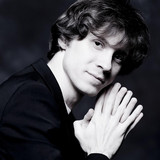 Rafal Blechacz (RA-faw BLEH-hatch) is a Polish pianist, born June 30, 1985, in Nakło nad Notecią, Poland. He later spoke highly of the small-town environment, saying that it was conducive to strong concentration on the piano. His training was exclusively in Poland. After completing his secondary courses at the National Artur Rubinstein Music School in Bydgoszcz, he studied with Katarzyna Popowa-Zydon at the Feliks Nowowiejski Music Academy. Blechacz was celebrated during the first part of his career for winning competitions. He received the second prize in the Artur Rubinstein in Memoriam Competition in 2002, tied for first place in the Hamamatsu International Piano Competition in 2003, and took the grand prize of the International Piano Competition in Morocco in 2004. In 2005, he impressed the judges of the 15th International Frédéric Chopin Competition in Warsaw by winning all five of the prizes (first prize, polonaise, mazurka, sonata, and concerto), a feat no other pianist has achieved. Blechacz records on Deutsche Grammophon. The secretive and prestigious Gilmore Artist Award was given to Blechacz in 2014. In the middle 2010s, as he outgrew prodigy status, Blechacz slowed his recording career and continued his studies, enrolling in a philosophy doctoral program at Nicolaus Copernicus University with a concentration in musical aesthetics; he has a longstanding interest in the writings of Polish philosopher Leszak Kolakowski. Blechacz continued his focus on Chopin with an album of polonaises in 2013, but then took a four-year hiatus, re-emerging with an acclaimed all-Bach release in 2017. In 2015 he received the Cavalier’s Cross of the Order of Polonia Restituta. An enthusiastic organist who plays the instrument for pleasure, Blechacz has toured Europe, Japan, and North America. Several of his album releases have achieved gold record status in Poland.