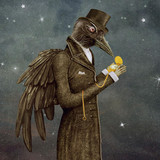 The Aquaerials is the alter ego of Mark Swanson, a Grand Rapids, Michigan musician who likes to pretend he's in a band with roughly 5 members, when in reality, he's just one amateur musician with a dirty old Casio keyboard he bought at Target 10 years ago and some software that allows him to pretend to be playing several instruments at once. With an arsenal that includes roughly twelve major and minor chords, and the astute ability to move his index finger up and down one note at a time to create an endless amount of chord progressions that sound essentially the same, The Aquaerials are a force to be forgotten. They won’t be playing anywhere near you, due to a crippling insecurity and social anxiety that will confine them to playing lonely songs in their basement, forgoing any recognition for the songs that basically deserve no recognition at all. Nonetheless, they will never stop, because popular music sucks and these guys are just dying to be popular. And they suck so bad, it just may happen. aquaerials@gmail.com