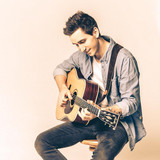 The Luke Andrews Band is a country-pop band based in Austria featuring singer and acoustic guitarist Luke Andrews, bass player Tom Traint, guitarist/keyboard player Stefan Haslinger and drummer Martin Weninger. In 2016, Tom and Luke went to London to enlarge their musical horizon. By simply knocking on people’s doors to get in contact, they worked with some of the best-known musicians and producers in the music scene. With a handful of new songs and gaining wealth of experience, they moved back to Austria and recorded the debut album LEAVE A TRACE with their friends David Clayton (keyboard player at Simply Red), Robbie McIntosh (former guitar player of Paul McCartney, John Mayer), the Austrian music legend Willi Resetarits (aka Ostbahn Kurti) and David Piribauer (former drummer of Alice Cooper, Glen Campbell) at the Mushroom Studios. After the release of the debut single COMING HOME, which went straight into the Ö3 Austrian Charts (#1), Stefan Haslinger and Martin Weninger joined the band. "With all the shows that followed, supporting Zucchero and Donavon Frankenreiter, playing at the Donauinselfest, or selling out the release show of the debut album, ... with every day of more than 100 shows, we got together a little closer.

So we went into the studio again and recorded our second album “LUKE ANDREWS BAND” in January 2020. Therefore, we're more than excited to step into the next chapter and feed you with some new music." Love, The Luke Andrews Band