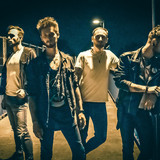 Young and relentless. Kinkpin is made of hard rock and metal, but unlike most of the old school bands, is not afraid to mix them with modern sound. We will take you for a ride with our music which is as different as the band members. The songs are inspired by a variety of emotions and moods, ranging from joy and energy to depressive thoughts. There is a part of each of us in every single song. Kinkpin is an independent band focused on creating each of its elements by its members, starting with the composition and sound, through recordings, ending with the visual side of the band.

An equally important part of the band's existence is being close to the audience and feeling one with the fans. Kinkpin was formed in 2019 on the initiative of Wojciech Żurek (drums and vocals) and Michał Włoczkowski (guitar and vocals) in Warsaw, Poland. Soon after that, Piotr Ferszter (second guitar), Damian Pyza (lead vocal) and Maksymilian Lange (bass guitar) joined Kinkpin. After Maksymilian's departure, Damian grabbed the bass guitar, creating the final line-up of the band. And now they are ready to leave the basement of the rehearsal rooms and enter the light of the club stages. Feel we gonna make it. Let's have something to celebrate!