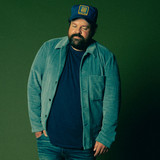 Over a year ago, when a hush fell over the house after his kids went to bed, Donovan Woods got to work on his celebrated album Without People, which he made in isolation at the height of the pandemic. Released on Woods’ Meant Well label, Without People was acclaimed as “a nuanced experience” (American Songwriter) and a thoughtful exploration of “fleeting interpersonal moments now under the microscope” (NPR/KUTX). So much of that album’s allure was rooted in how Woods connected with his collaborators and imparted the intimacy so many of us craved during a global health crisis. It was so successful, in fact, that it led to a deluxe edition of Without People in 2021. His latest release, “I Hope You Change Your Mind,” co-written with David Hodges (Maren Morris, Carrie Underwood, Ed Sheeran) is such an understated tearjerker that you don’t even realize the relationship is over until the last line. “That song is about that back-end portion of a relationship when everyone knows the score but no one wants to say it,” Woods says. “It’s loving someone so much that you’re not sure how to be mad at them, so you twist yourself into knots.” For Fans Of: Freya Ridings, Bahamas, Jason Isbell, Gregory Alan Isakov, Ruston Kelly, Joy Williams and Lisa Hannigan.