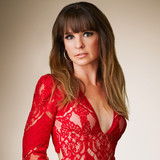 An American singer-songwriter with earthy six string pop plus ethereal electronica merged into fiery and spiritual adult contemporary rock with a twang that’s already bagged her a TOP 40 hit in Billboard. When not making music Rachel can be found in a dance class or out hiking. "Everything that power pop music should be." - Billboard Magazine Growing up in Orlando at age six, she wrote her first songs on an old upright bought by her dad, who painted it white and made it look beautiful. Losing herself in a world of creating melodies and lyrics, she has been doing it ever since. Rachel founded a girl group with a local producer and labels took interest in her when the group's run expired. Her self-penned single "I'm Not the Girl" landed in the Top 40. "Stick Your Tongue in My Mouth" received mainstream radio play and Rachel attended MTV's radio music awards in LA, where she saw her album on billboards in Beverly Hills. She was the musical guest performer on the Wayne Brady Show and shared the stage with numerous All-Star acts. And just like that she gave up on the music business machine that seemed to turn artists into a controlled and mass produced product rather than allowing them freedom and psychological health. Rachel went back to school to study political science, media and history. “Light Me Up” is her recent charting single and Rachel works in Florida communities to foster healing for trafficked and abused children while continuing to make music on her own terms.