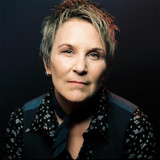 “With songwriting as powerful as hers, there’s no need to go looking for qualifiers. She’s a unique, intrinsically valuable musical voice. And there’s never a surplus of those.”— Randy Lewis, Los Angeles Time GRAMMY-Nominated Mary Gauthier has been called "a songwriter’s songwriter." She has released nine studio albums over her twenty-five-year music business career. She was named “One of Americana's most admired artists across the US and around the world” by The Wall Street Journal, who noted her “razor-sharp eye for detail and her commitment to unsentimental self-reflection.” A regular on The Grand Ole Opry, her songs have been recorded by Tim McGraw, Blake Shelton, Jimmy Buffett, Bettye Lavette, Bobby Bare, Kathy Mattea, Amy Helm and many others.

Her latest release, Rifles & Rosary Beads, is a record of songs she co-wrote with veterans through SongwritingWith:Soldiers, a non-profit program that pairs wounded veterans with songwriters. These songs tell the story of the last sixteen years of war and the effect war has had on Americans who’ve served and also on their families. In 2019, Rifles & Rosary Beads was nominated for a GRAMMY for Best Folk Album, was named Record of the Year by the Americana Music Association, and the UK Americana Association named Mary The International Artist of the Year. Her songs have appeared extensively in Film and Television, most recently on HBO TV’s "Yellowstone," and NBC’s "Nashville."