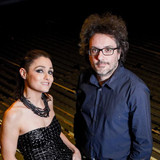 Comprised of vocalist Petra Magoni and bassist Ferruccio Spinetti, Musica Nuda are an Italian vocal jazz-pop duo whose popularity carried over to neighboring countries, especially France, during the mid-2000s. Born in Pisa, Tuscany, on July 28, 1972, Magoni studied music at the Conservatory of Leghorn and at the Pontifical Institute of Sacred Music in Milan. A versatile singer, she performed opera at the Teatro Verdi in Pisa early in her career while at the same time fronting a local rock group, Senza Freni. Petra Magoni (1996) marked her full-length solo album debut and was followed by a second solo album, Mulini a Vento (1997). She subsequently adopted the moniker Sweet Anima and released an eponymous album of English-language songs written by Lucio Battisti in 2000. In addition, she collaborated with Giampaolo Antoni in the electro-pop duo Aromatic, which resulted in the album Still Alive (2004). Most successful among her recording ventures, however, was Musica Nuda, a vocal jazz-pop collaboration with Piccola Orchestra Avion Travel bassist Ferruccio Spinetti that made its critically acclaimed eponymous album debut in 2004. Comprised primarily of well-known standards, many of them in English (e.g., the Beatles' "Eleanor Rigby"), the album was later licensed for reissue internationally by the Bonsaï Music label. While the duo's eponymous debut proved successful from a critical standpoint, the follow-up album, Musica Nuda 2 (2006), was internationally successful from a commercial standpoint as well, breaking into the French albums chart for seven weeks. Running two discs and 27 songs in length, Musica Nuda 2 features numerous guests. In the midst of their international breakthrough success, Magoni and Spinetti released a pair of live recordings: a video, Live in Paris (2006); and an album, Live à Fip (2007). A third studio album, 55/21 (2008), followed shortly thereafter. ~ Jason Birchmeier, Rovi